Read: Watch Live IPL 2012 Season 5 Online on Your Computer or Mobile
How to watch live IPL T20 Season 4 2011 matches online on your computer or your mobile phone? Indian Premier League 2011 Season 4 has 74 matches and all those live matches will be streamed on the Internet. Sony Entertainment Television network and Singapore-based World Sport Group secured the global broadcasting rights of the Indian Premier League. India’s The Times Group bagged the Global Rights to distribute on broadband, mobile and radio. They’ll telecast live all the IPL cricket matches. Indian Premier League Season 4 will feature 74 matches that will be played between 10 teams over a period of 51 days across various cities of India.

If you don’t have cable TV access and have access to internet then you can watch the IPL cricket matches on your computer. Since The Times Group bagged the Global Rights to distribute on broadband, mobile and radio they are providing video streaming of all the matches. All the IPL cricket matches will be streamed live at ipl.indiatimes.com site.
You can also watch live matches at the Indiatimes YouTube channel. 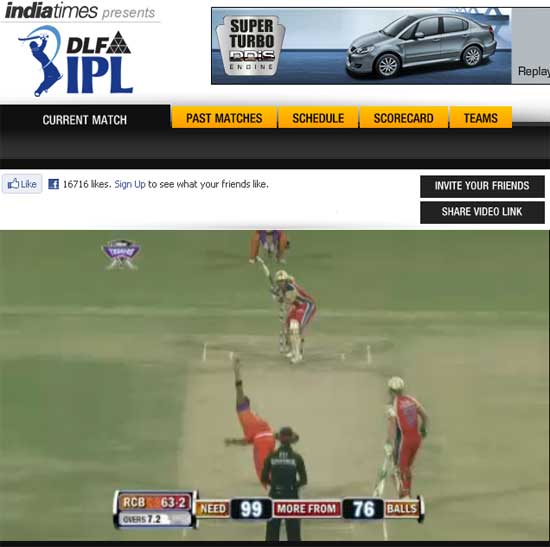 Your browser should have Adobe Flash Player 10.2 plugin installed to watch the live video streaming. The browser will ask you to install the plugin when you load the ipl.indiatimes.com page.