The new Indian Rupee Symbol which is approved by the Indian Government few days back.Now the problem is how to use the symbol on your documents and mails?.  The symbol may take a while to appear on the keyboard but users can right away type and use the Rupee character.

Majority of the Indian media and advertising agencies already started using the Indian Rupee Symbol. The booming Indian economy will help the new symbol to become popular across the globe.
Foradian Technologies a Mangalore, Karnataka based company has created a Font with Indian Rupee Symbol. You can easily start using  this font by following the steps below.  It is freely available for download and use.
Thanks to a newly-created font.

Type the first character on the keyboard which is on the left side of numeral 1. 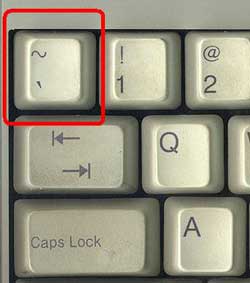 The new Rupee symbol will appear.See below

Comments (7) on “How to Use Rupee Symbol? Download Foradian Font with Indian Rupee Currency Symbol.”